For Sean Guerrero, earning his bachelor’s degree is a significant point of pride.

“I wanted to be the first to complete my bachelor’s degree in my family; so for me, this was a personal goal.” 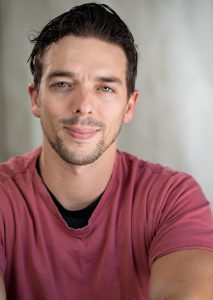 He reached that goal this summer by earning his B.A. in Leadership in the Public Sector (LPS).

Originally from Long Beach, Calif., Guerrero was studying at Cape Fear Community College in Wilmington when he began researching online degrees available in North Carolina to finish his four-year degree.

He chose to enroll in the LPS online degree-completion program since it allowed him the flexibility he needed while traveling for his full-time job.

“I had some of the best professors that taught with excellence and were always willing to help and answer questions I may have had,” he said. He is now a proud part of the Wolfpack alumni network.

Although Guerrero did not have a particular career path in mind when he enrolled, he “credits his faith in Jesus Christ for the grace and strength to achieving his four-year degree which enabled many opportunities in various fields.” He added his “bachelor’s degree in the professional market was the key that opened up more doors that would not open without it.”

Touting the communication and presentation skills he developed in the LPS program, Guerrero continued working full time – sometimes exceeding 70 hours a week due to the nature of his work at various times.

“I was already blessed to have had a strong professional career in government work having attained multiple professional certifications, etc. that carried weight along with my experience,” said Guerrero.

As someone who took time management to the next level, Guerrero worked full time while enrolled at NC State full time. He took his language classes at Lenoir Community College at the same time in order to graduate this summer.

“Having been overseas, I had a slight advantage in being ahead given the time zone difference. Organization and keeping good communication with my professors helped a great deal in managing my time to ensure I did not fall behind.”

According to Guerrero, “The LPS program provides all the key factors one will need to grow and succeed both in your personal and professional career. If you’re into politics or other government relations, this is an excellent degree — you can segway into so many opportunities with this degree because every company, organization and firm are looking for leaders.”

One of his favorite parts of the LPS program, because he had worked in this area, was the Advanced Military Leadership course. He said, “There were really great readings that we came upon and sought out for research that really helped to garner an understanding of how leaders in high-intensity situations handled their situations.”

The insights they learned from studying these leaders, some successful and others not so successful, helped prepare the students for how they will choose to lead.

He added, “My experience as a student in the LPS program was outstanding.”

Emphasizing the ability to earn your degree fully online, Guerrero mentioned he was living on a small island in Micronesia while working on his degree for a short time. His time management came in handy when there were so many distractions — 80+ degree water, scuba diving, fishing and more.

“When you have an LPS degree from NC State, you’re a proven leader who has set the pace for others to follow,” he said.

Guerrero plans to participate in the December 2019 commencement exercises for the School of Public and International Affairs, which is part of the College of Humanities and Social Sciences.

Are you interested in an online and distance education program at NC State? Visit online.ncsu.edu for a complete listing of program, certificate and licensure opportunities.

Education, Computer IT Move Up in Online Rankings

College of Education Ranked No. 30 for Best Online Graduate Programs

NC State’s College of Education was tied at No. 30 in the nation in the 2023 U.S. News & World Report’s Best Online Master's in Education Programs rankings. Nationally, the college also ranked No. 9 for veterans, and in specialty categories, No. 15 in Educational Administration and Supervision and No. 19 in Curriculum and Instruction.